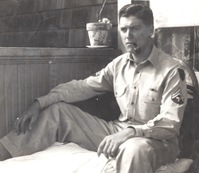 Anthony Zaccagnino, born January 2, 1925 in Waterbury, CT the son of Nicola and Anna Zaccagnino passed away October 25, 2019 in Stamford, CT. A proud member of the Greatest Generation having served in the US Army Company F 343rd Infantry Regiment 86th Blackhawk Division as a Sergeant having enlisted prior to his graduation from High School in March of 1943 and honorably discharged in March of 1946.
His role as a radio repair mechanic and Field Line installer prepared him for his longtime career as an electrician having owned his own electrical contracting business and later as a longtime electrical inspector for the City of Stamford.
On October 28, 1950 he married the love of his life Janet Sementini at Sacred Heart Church in Stamford, CT. They grew up together on Stamford's Westside. Having returned from the war he told her that he couldn't see her for the next 4 years as he had to go to trade school but if she'd wait for him they would be married. They would have celebrated their 69th wedding anniversary this year.
Anthony was predeceased by his sisters Beatrice and Mary and brother Salvatore. He is survived by his brother Nicolas Zaccagnino, sister-in-law Grace Zaccagnino, daughter Rosanna Zaccagnino all of Stamford, CT and son Anthony and spouse Torrina Zaccagnino of Old Greenwich, CT.
Wake to be held from 4:00 p.m. – 8:00 p.m. on Tuesday, October 29, 2019 at Lacerenza Funeral Home, Stamford, CT with a Mass of Christian Burial on Wednesday, October 30, 2019 at 10:30 a.m. at Sacred Heart Church, Stamford, CT. Interment will follow at Queen of Peace Cemetery.
In lieu of flowers, the family requests donations to Curtain Call Inc., 1345 Newfield Ave., Stamford, CT 06905 c/o Lou Ursone. To leave an online condolence, please visit www.lacerenzafh.com

To submit your request for TAPS, please complete the form below.